The Transition from Smoking to Vaping

Imagine this, you are sitting outside on your balcony, enjoying the gentle night breeze, as you unwind from your long, stressful day at work. However, as you close your eyes to relax, your neighbor lights up a cigarette on his balcony. Immediately, the gentle breeze blows the smoke your way, surrounding you in a murky cloud of second-hand smoke. To avoid the fumes, you quickly leave the premises and head inside for a drink of water. What a fantastic way to end the day!

Studies show that the current public perception of smoking has come a long way, evolving due to people’s increased awareness of smoking hazards. Unfortunately, many still choose to put the cigarette between their lips again and again despite knowing the health risks involved with smoking, which include coronary heart disease and the development of lung cancer.

Although some may have initially developed the interest as a way to alleviate stress, or to socialize more with their co-workers, their inability to quit demonstrates the toxic chemical power packed into that small roll of paper.

So, what is the alternative to quitting cold turkey or using nicotine patches? The latest, most popular solution is e-cigarettes (electronic cigarettes), also known as vaping.

Vaping, in A Few Words

The World Health Organization (WHO) defines e-cigarettes as a product advertised by manufacturers as the safer alternative to smoking. It lacks tobacco, along with its toxic carcinogens, therefore making it ‘safer’. It is a device designed to help smokers gradually quit. But who is truly benefiting from the marketing of e-cigarettes? The WHO report calculates that the global industry earns approximately 3 billion dollars from the marketing and distribution of the product. Also, there are about 466 brands selling the product and related versions alike. Furthermore, with the availability of approximately 8,000 unique flavours on the market, it’s no wonder more people are vaping instead of smoking!

The Cause for Concern

E-cigarettes and vaping are often thought of as the safer form of smoking. You get the “coolness” of smoking without the dire health consequences… Right?

Contrary to popular opinion, current professionals’ findings suggest otherwise. Currently, Dr. Avrum Spira, a pulmonary care physician and professor of medicine and pathology at Boston University, urges people to be wary of what they are breathing into our bodies.

E-cigarettes vaporize liquid that contains nicotine and flavouring, but is that all? According to Spira, the conversion of liquid to vapor changes the chemical composition of the liquid, causing you to potentially breathe in other chemicals besides the vaporized nicotine.

Moreover, the results of Spira’s preliminary research is not positive. It demonstrated that when e-cigarette chemicals come into contact with the mutated human lung cells of smokers who are about to develop lung cancer (their cultured cells), the lung cells became “more cancer-like”.

The Other Side’s Argument

On the other hand, there are also others who believe that the vaping ‘issue’ is not really an issue at all. Boston University Public Health Professor Michael Siegel strongly believes that the use of e-cigarettes will aid cigarette addicts and continue to do so. In fact, he believes that research regarding vaping should be redirected towards a more positive note. It should not restrict the utilization of vaping and condemn users, but help current smokers gradually quit smoking. In other words, e-cigarettes should should fulfill its original purpose, and help the addicted eventually quit.

To Vape or Not Vape, That Is the Question.

At present, it appears that there are conflicting views within the medical community regarding the benefits and regulation of e-cigarettes. While the WHO, the FDA, and Pulmonologist Avrum Spira assert that there may be negative health consequences related to vaping, Public Health Professor Michael Siegel and his supporters advocate for the continued marketing and use of e-cigarettes, along with more (positive) research regarding the effects of vaping. And so, the debate, and the research, continues. Which side will you take?

Joyce Lan is an undergraduate student at UCLA majoring in Linguistics & Asian Languages and Cultures. She is the Website & Media Chair of BreatheLA at UCLA, a club that seeks to raise awareness of UCLA’s tobacco and vape-free policy. 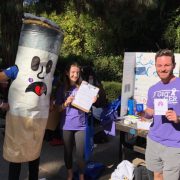 Does Seeing Other People Smoke Bother You?
0 replies

Want to join the discussion?
Feel free to contribute!